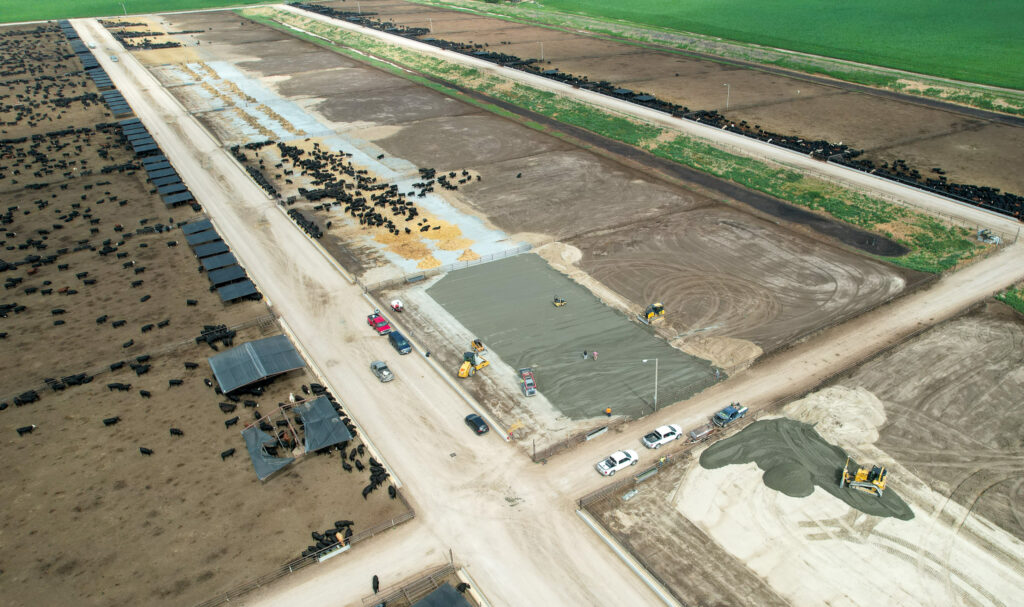 Many considerations go into the design of a beef cattle feedlot: animal welfare, cost, manure management, and space utilization are a handful that may come to mind, among many others – but how often is the pen surface type considered? Most feedlots today consist of open soil-based pens to provide a home for feeder cattle where they can gain weight in a comfortable environment. While this industry-standard design has proven successful for many decades, advances are being made to improve feedlot pen surfaces – roller compacted concrete (RCC) leads the way as a key advancement, providing an improved concrete pen surface with many advantages.

RCC was first developed to rapidly deploy concrete surfaces capable of withstanding heavy loads at a reasonable cost. It’s often used to build dams and sub-bases of roads, among many other uses – including feedlot pens. RCC is made of the same ingredients as its ready-mix counterpart: cement, aggregates, and water. The difference is that RCC is much drier than conventional concrete, allowing it to be transported and distributed by dump trucks and then compacted by vibratory rollers.

There are seven distinct advantages that rise to the surface when comparing RCC to conventional soil-based open lots:

Keeping feedlot cattle clean and healthy can certainly prove to be a challenge. Wet conditions in a conventional pen often leave cattle covered in mud, leading to a host of problems. Mud on cattle can attract flies while also reducing the insulating properties of cattle hair as it gets matted down. Depending on weather conditions, this can cause them to chill more easily which can cause stress. This combination is a recipe for disease vulnerability as the immune system is inhibited. Footrot and digital dermatitis are other major concerns in muddy pens. The bacteria which cause these diseases live in soil, so when soil turns to mud, foot root becomes an issue as cattle spend time in wet areas. When hooves dry, the incidence of foot rot decreases.

Cattle housed in RCC pens, however, are likely to stay much cleaner and as a result, healthier than those in conventional lots. Mud is much more likely than manure to stick to cattle, and in an RCC system, there is virtually no dirt to turn into mud since pens have a concrete surface, essentially removing a variable from the dirtiness equation.

Cattle performance is a top priority in a feeding operation. Many variables factor into performance as managers work hard to control and optimize as many of those as possible. RCC pens can remove some of the uncertainty associated with cattle performance through improved feed conversion. Research findings and industry usage of RCC have shown increased average daily gain and feed-to-gain ratio over conventional lots. A study from Alberta Agriculture and Forestry found that yearling cattle fed in RCC pens had higher average daily gain and higher feed-to-gain ratio than their counterparts in clay pens. Better health and less energy spent tromping through the mud are a winning combination resulting in better overall feed conversion on an RCC surface. These performance metrics could be even higher in some cases dependent upon many variables within an operation’s control, and RCC provides a solid baseline benefit from which to build in terms of improved feed conversion.

Pen maintenance is a major expense for almost every feedlot, not to mention requiring a significant amount of labor. With RCC there is much less need to worry about over-scraping, which means it is unnecessary to haul in sand or clay to build up pens. The absence of dirt also means there will be much less ash in manure, resulting in lower hauling costs when it comes time to apply nutrients to fields. This reduction of ash coupled with higher moisture retention can also lead to more nutrient-dense manure, increasing its fertilizer value.

Leaving some manure in RCC pens can actually be beneficial to provide a bedding layer for cattle. Other materials can also be used for bedding, such as pond ash or straw. It is also common practice to build a mound in RCC pens, similar to conventional pens. The concrete surface alone results in much better drainage than a soil surface, and mounds add to this already improved benefit. 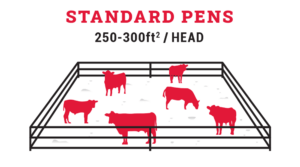 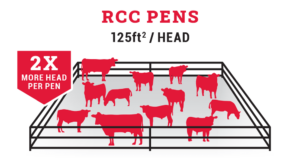 Once earthwork, plumbing, and other site work are complete, RCC can be quickly installed. The mix is significantly drier than conventional concrete and is installed differently as well. While concrete is often batched offsite and poured from a ready-mix truck, RCC is batched onsite and laid down with dump trucks and then leveled with GPS-guided dozers. Rollers quickly follow to compact the concrete. The drier mix allows for quicker installation at a larger scale, not only speeding up installation but also curing time. In new construction, fences are often installed after RCC but can be installed before or simultaneously as well. Barring any fences needing completion, RCC is ready for cattle to set foot on it within a couple of days. The many benefits of this pen surface can be realized very quickly, whether it be in a new feedlot or at an existing facility where the pens are being upgraded.

6. Opens the Door to Anaerobic Digestion

Anaerobic digestion is becoming increasingly popular in livestock production. The process takes manure and retains it in a digester, either a covered lagoon or concrete tank, and collects the biogas produced from microbes in the manure. Once digestion has taken place, the manure is used for fertilizer per usual practices and the nutrient content is virtually unchanged by the digester. The biogas is processed through a cleaning and compression system to be pure methane, or renewable natural gas (RNG), and sold to a natural gas utility company. The real economic benefit comes from another revenue source – carbon credits. Credits of various types are available to add even more revenue from the sale of RNG produced from livestock manure.

The anaerobic digestion process is most commonly not feasible for beef cattle feedlots due to the amount of inorganic material (dirt and sand) in manure, not to mention the extreme variability of that material and moisture. A digester is similar to a steer – it performs best when fed a consistent diet of the proper composition but changes its diet frequently and it will not perform as well. Unlike conventional soil-based pens, RCC provides a relatively clean and consistent manure feedstock for anaerobic digestion. This opens the door for new manure management and revenue opportunities for an operation. 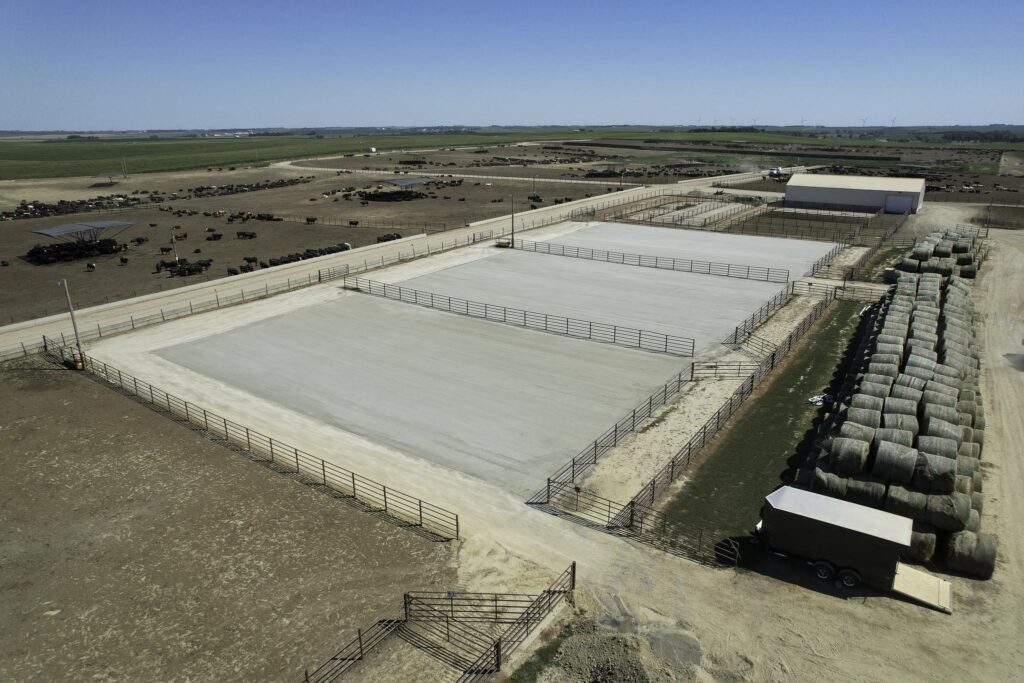 RCC delivers significant value at a reasonable cost – consider many of the benefits: improved health and cleanliness, improved feed conversion, simplified pen maintenance, more cattle in a smaller footprint, quick construction, and the opportunity to implement anaerobic digestion. The turnkey cost for conventional soil-based open lots is $350-$400 per head while RCC is $550-$700 per head. While RCC has a higher initial investment, maintenance costs are lower and cattle experience better health and performance. It should also be noted that many benefits of a confinement barn are realized with RCC pens, such as higher stocking density, reduced bunk space, and improved health in many aspects. All in all, RCC pens have many advantages over conventional soil-based open lots.

Settje Agri-Services and Engineering is excited to be leading the beef cattle industry in the adoption of RCC as a feedlot pen surface. Since our founding in 1997, we have worked to deliver unmatched design, engineering, construction, and environmental compliance services to livestock producers. Our goal is to connect producers with the best solutions for their operations, and we believe RCC has much to offer to producers. If you are interested to learn more or would like to install RCC on your operation, give us a call today at (402) 783-2100 or visit www.settje.com/rcc for more information.

If you have questions or would like more information on how Settje could assist you in assessing your GHG emissions, contact your local Settje consultant. If you don’t have a Settje consultant, you can contact us directly.